Japan. The country of tea ceremonies, calligraphy and cherry flower blossoms. The land of the rising sun.

This mystical and exotic image is what comes to mind for many people when asked to picture Japan. While some of it is certainly true – where else would you find the best sushi other than the country where it originated from? – this picture  highlights the generalization of the entire Japanese culture as that of a mysterious, ancient country.

There is a side of Japan that is often forgotten about: its merit as a strong economic force. Business in Japan is booming, and every day people from other countries have to think about how best to interact with a culture they are completely unfamiliar with.

My colleagues and I were prime examples of these kinds of people, so when we had our first meeting with Japanese representatives of a company listed on the Japanese stock market, we naturally put all our efforts into the process of acquiring as much knowledge regarding Japanese customs. While there are many articles online about doing business in Japan, not a lot of attention has been given to how to approach meetings with Japanese people in your home country. Below, I will share our personal experiences, and lay out  our findings and observations when it comes to connecting with professionals from different cultures.

Let me start with some reassurance. It is a commonly held belief that a single faux pas can make or break the business relationship, and both my colleagues and many other business representatives were/are painfully aware of the weight of the situation. This is why it is important to mention that most Japanese people are aware of the difficulties unexperienced business partners might have with their culture, so my first advice is not to worry too much about making a mistake.
In fact, the Japanese representatives we met possessed such a high level of intercultural sensibility that they did their best to provide us with inconspicuous help whenever they noticed a discrepancy between cultures.

About the business culture

When looking at general aspects of the Japanese culture you should consider during a meeting, the first one that comes to mind is the fact that business processes are usually conducted in an introverted and formal manner. However, it is common for those who visit Japanese companies to get invited for drinks or karaoke afterwards, so there is a possibility that the meeting results in a more informal conversation even when the Japanese representatives visit Western countries.

Another highly important cultural aspect is the Japanese appreciation for silence. It is often used to express respect and consideration, and it is advisable not to interpret these quiet moments negatively.

According to Dutch social psychologist Geert Hofstede’s cultural dimensions theory, the Japanese people score highly in the dimension of Uncertainty Avoidance, which is the way a society deals with the fact that the future can never be really known. This high score makes is expressed in the peoples’ fondness of stability and predictability that can be seen throughout different parts of the culture. It also explains their interest in the durability of things such as companies and business relationships.

During our meeting with the Japanese representatives, they mentioned previous points of contact and even scrolled through their emails from more than five years ago, when our companies first got into contact with one another. This shows the Japanese focus on the long term, and it is the reason why lasting relationships and reliable partners are of such great importance.

The question that might arise now is the following: How do I show my company’s suitability as a long-term business partner?
The answer is simple, but requires effort; the most effective method to enter a business relationship with Japanese companies is by proving your competence and skills. This can be done in form of a conclusive presentation of your company, including important figures and objectives as well as a coherent (but not too persuasive!) focus on how a relationship would benefit both organizations.

Because of the previously established reasons, it is advisable to avoid hyped-up and highly stylized presentations that barely convey any important information other than the conclusion that the company is great. Japanese people appreciate a detailed presentation that lays out exactly how you have come to this conclusion. Support it with facts and illustrative figures and use a gentle way of speaking that builds on points of agreements.

Respect the fact that Japanese education favors teaching through written English rather than spoken English. Talk slowly and clearly, and if you are holding a presentation make sure that all the important information can be found on the slides. This helps them understand it, but also reflects how it is usually done in Japan – if something is not on the slides, it is probably unimportant.

You should also think about sending them the presentation before the meeting (and providing them with a summary afterwards). Besides providing them with a tangible version of the information they need, it also enables them to prepare for the meeting and ask questions. Without this preparation, the conversation might be relatively one-sided, since Japanese do not like do stand out in groups, nor do they like to be wrong or seen as unknowledgeable.

The aspect that was the most noticeable has already been mentioned, but it cannot be stressed enough: Japanese people’s focus on long-term relationships. It was referenced throughout the whole meeting, and it was beneficial that our presentation had been created around that focus. Of course, the situation might differ if you haven’t been in contact with the company for a long time, but in that case the focus can simply be shifted to the future relationship you would like to have with the company. It could be a good idea to mention successful and lasting relationships you already have to show your experience maintaining these relationships, but more emphasis should be put on the relationship at hand.

Body language is your best friend. I have stated that the Japanese we met gave us subtle hints concerning appropriate behavior, and this is where I would like to give an example. Entering the meeting, we knew that their culture is hierarchical and that age equals seniority. However, when you are approached by several people it is easy to lose focus and simply greet the nearest person. A young member of the Japanese group helped us avoid this mistake by turning slightly towards the most senior person in the room, indicating that he was the first person to be greeted. 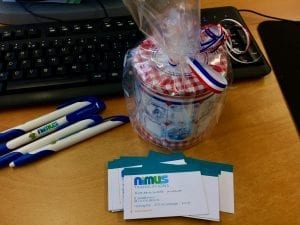 The Japanese culture is beautiful and somewhat mysterious, no question. But there is no reason to be afraid of business meetings when you have prepared yourself to the best of your abilities. The Japanese appreciate the effort, as it shows respect and a willingness for mutual understanding.

We have prepared ourselves with a presentation that offered in-depth information about our company and business relationship, and by showing up with Japanese business cards and a typical Dutch gift. We can now look back at a successful business meeting, which will strengthen our long-term relationship.

If you would like to know more about Japanese business etiquettes or their culture, feel free to contact us. We would love to be of service!